HARRISBURG –  The Harrisburg City Council will hold a series of public meetings beginning 5:30 p.m. Wednesday, May 16, 2018 at the Public Works Building, 1820 Paxton St., to allow citizen input on the new sanitation ordinance. The ordinance concerns proposed fines for trash and recycling violations and proposed annual payments for trash service.

Dates of other meetings include:

All Harrisburg city residents are welcome. For more information, contact Joyce M. Davis, Director of Communications, City of Harrisburg at jdavis@harrisburgpa.gov, or call 717 255 3015.

The City of Harrisburg, in partnership with Capital Area Transit, is conducting a study to improve bus stops along six important streets. The study is looking at bus stop locations, bus stop spacing, and bus stop features.

Back in January, the first public meeting was held to gather your ideas on how to improve CAT’s bus stops. Now, we want to show you how those ideas have been incorporated into the study.

Please join us at a public open house to review preliminary improvements to CAT’s bus stops and let us know what you think!

For more information, please contact the City of Harrisburg helpdesk by phone at 311 or online at http://harrisburgpa.gov/helpdesk/

May 27, 2018 Harrisburg, PA – Mayor Eric Papenfuse sends special Memorial Day greetings to families of servicemen and women who have sacrificed their lives in the line of duty to ensure freedom for all Americans.

“As we gather with our own families and friends to enjoy the Memorial Day holiday, we should take time to remember the true import of the day,” Mayor Papenfuse said. “We would not be able to enjoy our freedoms as American citizens if thousands had not put their own lives on the line in protection of our country.

“On behalf of the residents of Harrisburg, we honor those who have fallen in service to our country, and we stand with their families in remembering their ultimate sacrifice.”

May 25, 2018
HARRISBURG –  Representatives for the City of Harrisburg will begin conducting surveys of residents on State Street on May 30 and 31 as part of the new “Vision Zero” initiative to combat increasing rate of traffic fatalities.
The surveys are part of a multi-pronged approach that will include gathering data on traffic accidents, engaging residents in public meetings and designing effective strategies aimed at eliminating deaths from traffic accidents.
Survey will be conducted at the corner of 17th and State Streets at the following times:
Wednesday, May 30, 4 p.m. – 6 p.m.
Thursday, May 31, 7 a.m. – 9 a.m.
“’Vision Zero’ will engage the community in identifying the causes of Harrisburg’s increasing traffic fatalities, including those involving pedestrians,” said Mayor Eric Papenfuse. “The initiative also will engage the community in finding solutions to this distressing problem in our City.”
Paper surveys also will be available at Fire Station #2, 140 N 16th St, Harrisburg, in a secure box until June 7.
Online surveys at VisionZeroHBG.org can be completed through June 7.
Please see fact sheet below on Vision Zero:
What is Vision Zero?
A plan to improve pedestrian, cyclist, and driver safety in Harrisburg, beginning with State Street. The plan will focus on road design; pedestrian, cyclist, and driver education; and enforcement.
When does Vision Zero start and end?
The surveys on May 30 and 31 will kick off Vision Zero in Harrisburg. The plan is expected to be completed in 6-8 months, and end with a set of recommendations for safety improvements.
What is included in Vision Zero?
Vision Zero will include a community and commuter survey about road safety, including safety along State Street and other roadways. There will also be community workshops and meetings that you can attend to provide input and keep up with study progress.
Why is Harrisburg creating a Vision Zero plan?
Vision Zero is a plan designed to eliminate serious injuries and deaths on City roadways. Vision Zero is being kicked off in Harrisburg in response to increased injuries and deaths along State Street and other Harrisburg roadways.
Where is the study focused?
The first phase of the study take place this summer along State Street, with the study expanding to downtown Harrisburg this fall. Surveys will be conducted on the street and online. Workshops and public meetings will be held in convenient locations in the community.
How to participate
We want to involve the entire community, and we want to know what you think:
How to get more information
For more information, contact Joyce M. Davis, Director of Communications, City of Harrisburg at jdavis@harrisburgpa.gov, or call 717 255 3015.
##

HARRISBURG (May 24, 2018): The City of Harrisburg and Capital Region Water will be hold a Minority/Women/Disadvantaged Business Enterprise networking and certification event on June 1, 2018. This event, sponsored by the Keystone Contractors Association, will connect local construction companies through networking and increase opportunities for small, diverse businesses on upcoming construction projects.

The City of Harrisburg will host a press conference with Mayor Eric Papenfuse to provide more details about the event at 1o a.m. Wednesday, May 30 in the atrium of the MLK Government Center, 10 N. Second St.

What: Doing Business with the City of Harrisburg and Capital Region Water, Meet the Primes & MWDBE Certification Event

MBE/WBE/DBE certifying agencies, financial institutions, and bonding and insurance firms will also be on hand to help local businesses prepare for doing business with the City of Harrisburg and Capital Region Water.

Blending world-class art with the beauty of the Susquehanna River, Artsfest brings together artists and community members from around the region and the country. Held annually in Riverfront Park in Harrisburg, Pennsylvania, Artsfest features over 250 exceptional, juried artists and craftsmen from across the United States and Canada.

This FREE festival attracts over 40,000 visitors over the 3-day weekend with individuals and families from local communities, Philadelphia, Pittsburgh, Baltimore, MD, Washington D.C.,  New York and more, annually to the Greater Harrisburg Area.

The festival includes an entertainment stage where original musicians preform all three days. Featuring the best of regional scholastic bands, exciting emerging original bands and additional performers by the Central PA Friends of Jazz, hosted by Steve Rudolph. Artsfest is also home of Kidsfest and FilmFest. These events allow the festival to be both family friendly and attractive to a unique audience of independent film fans.

As the largest festival in the Harrisburg region, Artsfest has been the winner of six Harrisburg Magazine’s “Simply the Best” Awards and honored as one of Sunshine Magazine’s Top 13 Festivals.

April 15, 2018 HARRISBURG – Mayor Eric Papenfuse will announce the start of a glass recycling program in the City of Harrisburg at a press conference at 10:30 a.m. Monday, April 16, 2018 in the atrium of the MLK Government Center, 10 N. Second St.

“We are pleased to be able to provide a way for our residents to recycle glass jars and bottles,” said Mayor Papenfuse, “This is just another way we’re trying to implement environmentally friendly programs that will make us a green and progressive city.”

The Mayor will announce locations where residents will be able to drop off glass for recycling beginning Earth Day, April 22, 2018.  Specific glass products, including jars and bottles without lids or tops, will be accepted. 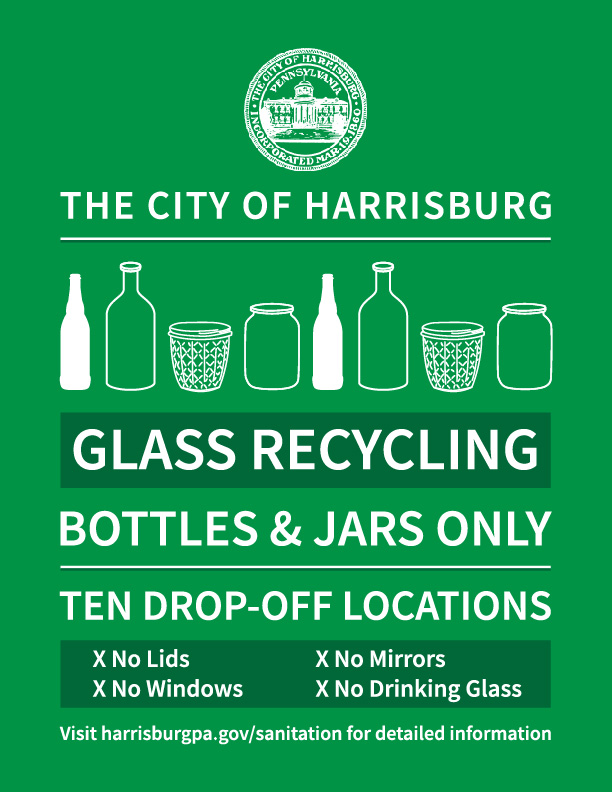 Glass products such a mirrors, windows and drinking glasses, are not acceptable for recycling in the program.

Drop-off locations will be posted on the City’s website and on social media.  They include:

March 26, 2018 – Mayor Eric Papenfuse will lead a press conference at 10 a.m. Tuesday in the MLK Government Center, 10 N. Second St., to announce details of the plan to provide free parking after 5 p.m. in Downtown Harrisburg.  The Mayor will be joined by representatives of SP Plus, the Downtown  Improvement District (DID), Dauphin County and downtown business owners to provide information on the start date for the free parking as well as the map of the area that will be included.

The free parking that will become available in Downtown Harrisburg after 5 p.m. is the result of collaboration among the City, Dauphin County, business owners and SP Plus.

The parks that are closed include:

Residents are advised to avoid these parks until further notice from the City of Harrisburg. Parents/Guardians are requested to alert children that the parks are closed and ensure they do not enter the area.  The City will strictly enforce trespassing ordinances during the closures to protect public safety.

Streets near parks also may be closed during the work periods, and the City will alert the public at least 24 hours in advance.

ADA accessibility issues will be addressed at each of the parks. The basketball courts at Royal Terrace and Cloverly Heights also will be improved to make them more environmentally friendly.