“Peace on Earth, Peace at Home” was the theme of the 2017 Giant Holiday Tree Lighting Ceremony at the MLK Government Center, hosted Tuesday, Dec. 5 by the Mayor’s Interfaith Advisory Council.

“Peace is the greatest gift we can have during this holiday season,” Mayor Eric Papenfuse told those gathered in the atrium for the annual celebration.  “But peace must begin in our own hearts, in our own homes and in our own neighborhoods.” 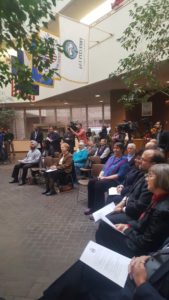 Mayor Papenfuse and Members of his Interfaith Advisory Council at 2017 Giant Holiday Tree Lighting Ceremony in the MLK Government Center. 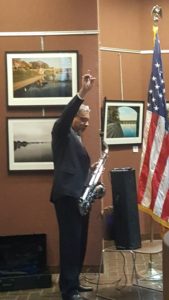 Faith leaders from throughout the region spoke at the ceremony to officially light the 26-foot tall tree, which Giant Foods donated to the City in December 2014 during Mayor Papenfuse’s first year in office. 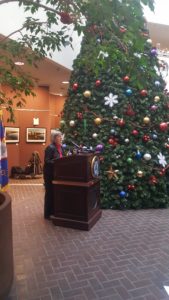 Rev. Sandy Strauss, Director of the PA Council of Churches, served as MC.

Click HERE to get a sample of Rev. Manny Valentin’s rendition of “Let There Be Peace on Earth.”