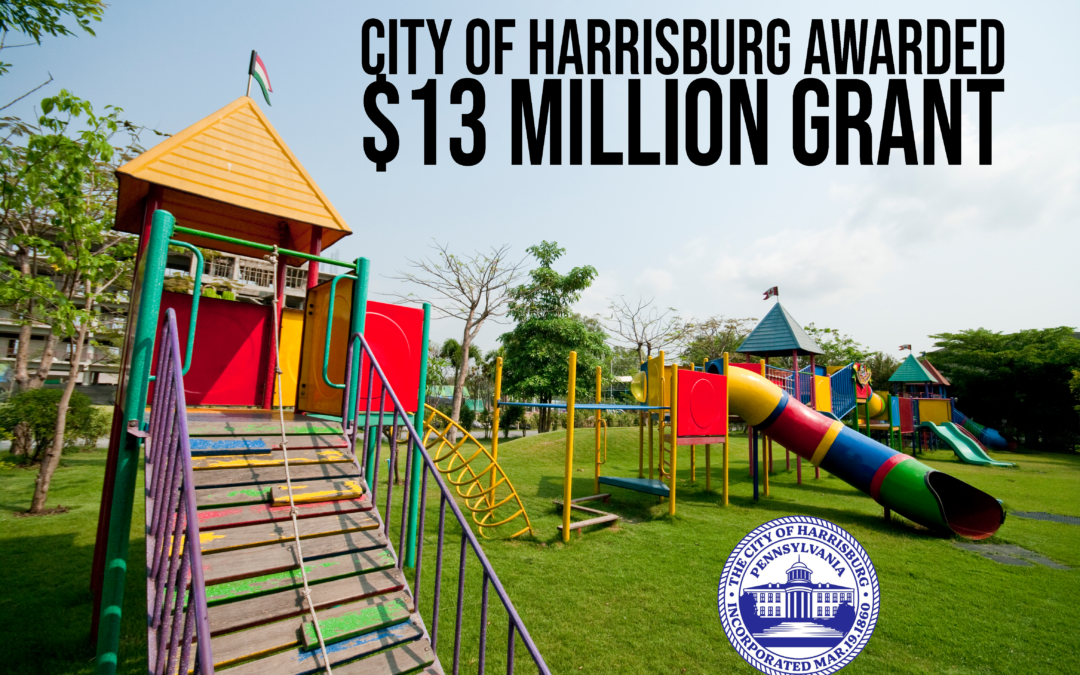 The City of Harrisburg received more than $13 million in grants from the Pennsylvania Department of Community and Economic Development, money which will go towards rebuilding and revitalizing city parks.

HARRISBURG – Several parks in the City of Harrisburg are about to get a complete makeover, and will soon become more modern and inclusive than ever before.

The city, on Tuesday, received a $13,005,733 grant from the Pennsylvania Department of Community and Economic Development for city park improvements. Funds will be used to rebuild and modernize 7th & Radnor Park, Jackson Lick Pool, Wilson (Rumson) Playground, and Reservoir Park.

This grant money comes from the most recent round of Community Development Block Grant-CARES Act (CDBG-CV) funding, which is designed to support community improvements meant to enhance the quality of life for residents. Because the grant comes from CARES Act funding, the city had to show why improvements were needed as related to the COVID-19 pandemic.

“The pandemic highlighted not only how much our residents wanted to use our parks, but how much those parks desperately needed improvements,” said Mayor Wanda R.D. Williams. “I want to thank Governor Wolf and Secretary (Neil) Weaver for showing the people of Harrisburg that they are prioritizing our great city. I would also like to thank our team, led by Grants Director Rebecca Vollmer, for securing this money, which will not only lead to newer and better parks, but will improve the lives and mental well-being of everyone in the City of Harrisburg.”

Many communities and entities across the Commonwealth applied for funding in this round, and the city’s $13 million grant [VR1] was the largest award allotted. A total of $45 million was given to 15 separate entities.

The parks chosen for improvements are those that are deemed the most in need of immediate repairs. The city is currently in the midst of creating a comprehensive recreation, park, and open space plan for Harrisburg, made possible by a $58,900 grant by the Department of Conservation and Natural Resources, in which additional needs for city parks will be identified.

Once construction begins, the parks project funded by this extraordinary opportunity to implement CDBG-CV funding is expected to be the largest city park project since the modernization of City Island. When completed, at a time still to be determined, the parks designated for improvements will be fully compliant with Americans with Disabilities Act standards, will be inclusive to all sensories, and will have increased safety measures.

“These parks will look nothing like they do now once we’re done with them,” said Parks and Recreation Director Dave Baker. “We’re going to undergo a complete rehabilitation to bring them up to modern requirements and expectations for what our residents deserve.”

Among the updates include new playgrounds and park equipment at 7th & Radnor and Wilson Parks. Jackson Lick Pool will be converted into a spray park. A spray alley will be added to Reservoir Park.

“These areas are in critical need of updates,” Baker said. “Some of the playground and park equipment is dangerous and unusable. The pandemic showed us an unprecedented number of people are using our parks, so we need to meet their needs with the necessary updates. Safe, accessible parks and recreational facilities will provide residents of the City of Harrisburg with safe spaces to appropriately socialize and exercise.”