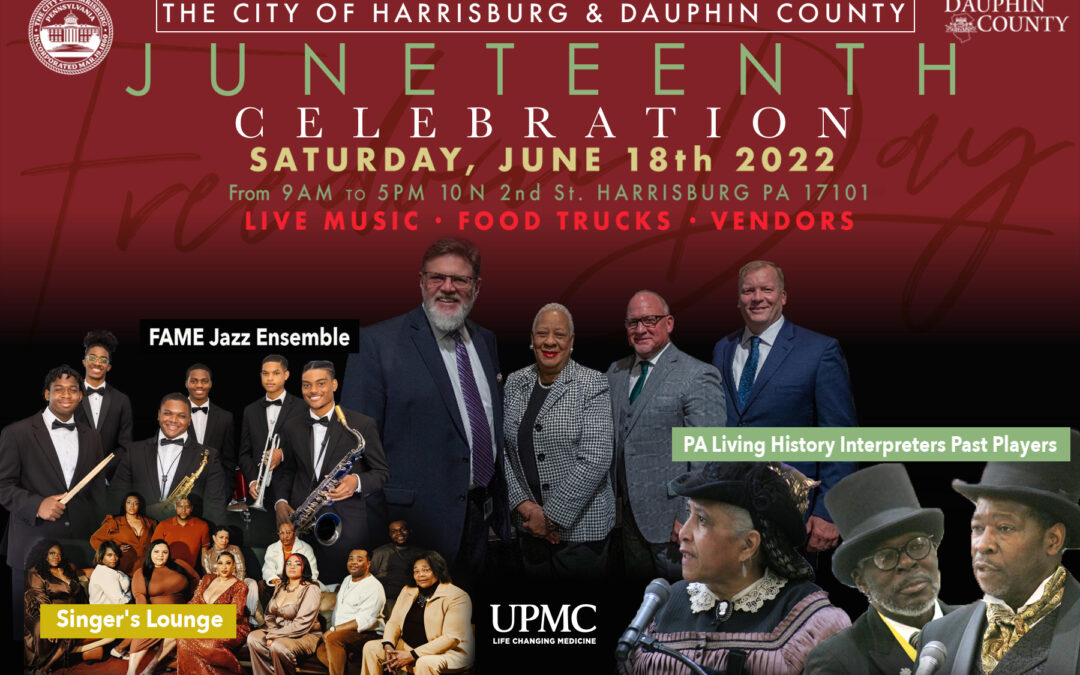 HARRISBURG – For the first time, City of Harrisburg leaders will join Dauphin County officials to celebrate Juneteenth, the federally and state-recognized holiday which marks the end of slavery in America.

Harrisburg Mayor Wanda Williams, alongside County Commissioners Mike Pries, George Hartwick, and Chad Saylor, and other local dignitaries, announced the Juneteenth Celebration to be held on Saturday, June 18, in front of the Dr. Martin Luther King Jr. City Government Center, located at 10 N. 2nd Street in Harrisburg. The event, the first jointly sponsored event between the city and county, will celebrate Black history, heritage, and culture in a block party atmosphere.

“The City of Harrisburg is majority African-American. We are proud to be a Black city and I am proud to be a Black mayor,” said Mayor Wanda R.D. Williams. “We want everyone to share that pride and know that this is no place for hate. No place for racism and bigotry. Juneteenth is a holiday about love and freedom, and we can’t wait to show everyone what that is all about Saturday.”

Sixty artisan vendors are expected to participate in the city and county’s Juneteenth event, which will be held from 9 a.m. to 5 p.m. There will be live performances by the FAME Jazz Ensemble of Washington D.C., The Singer’s Lounge music group, and the Pennsylvania Past Players, which is a reenactment group led by Harrisburg historian and academic Lenwood Sloan.

There will also be a live performance by Harrisburg hip-hop artist LOE Badgett, who will rap his new single “Break The Cycle,” a song about local youth staying away from gun violence. The single comes at the request of Harrisburg Police Commissioner Thomas Carter.

“Our job is to alleviate barriers, not create new ones,” said Dauphin County Commissioner George Hartwick. “Not only will this event be packed with historical references and breaking down walls and barriers, but it’s also about having a little fun and getting to know each other a little better.”

There will also be numerous food trucks participating in the all-day event.

Sunday marks 157 years to the day that the last of slaves were emancipated from Galveston, Texas, as word of President Abraham Lincoln’s Emancipation Proclamation finally made its way to the deepest parts of the Southern states.

On Saturday, Second Street will remain closed between Market and Walnut Streets between 6 a.m. and 5 p.m. Parking is standard, normal fares during the event.

UPMC is also a participating sponsor of the City of Harrisburg and Dauphin County’s Juneteenth Celebration.

“As a leading health network in the region, UPMC’s support of Juneteenth and Black advocacy as a whole is more important in ways I cannot properly convey,” said Mayor Williams.

A full schedule of Juneteenth Celebration events can be found on the city’s Juneteenth website, at https://harrisburgpa.gov/juneteenth-celebration/.