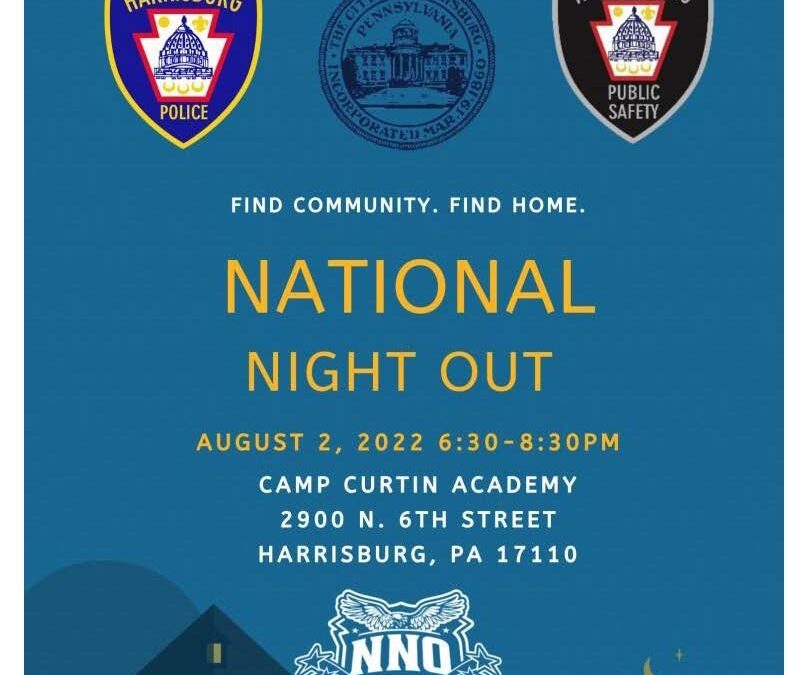 HARRISBURG — Mayor Wanda R.D. Williams and the Harrisburg Bureau of Police discussed details for National Night Out, which is scheduled to take place Tuesday, Aug. 2 from 6:30-8:30 p.m. at Camp Curtain Academy at Division & 6th Streets.

“National Night Out for the City of Harrisburg gives the community a chance to hang out with police officers and Harrisburg firefighters in the safe space. This is the ultimate family event,” Mayor Williams said.  “For two hours next Tuesday you will be able to play games, ask questions, and spend the night with the men and women who keep us safe every single day. This is one of the most fun nights of the year.”

National Night Out is an annual event allowing community members to connect with law enforcement and public safety professionals in a fun, safe setting.

The event will feature games for kids, a dunk tank, pony rides, and a chance for children to tour police cruisers and firetrucks. There will also be food trucks, and Farm Show milkshakes available to purchase.

“One of the main reasons that we are looking forward to this is because we get a chance to spend time with our youth. They are our future,” said Commissioner Carter. “It is all about families. It is all about relationships with citizens in this great city.”

“There’s a disconnect in this country right now between law enforcement and the people they serve. Every day, it seems like there’s a different story on the news about people acting up. I’m happy to say that doesn’t happen in Harrisburg,” Mayor Williams said. “I could not be more proud of the work Commissioner Carter, Fire Chief [Brian] Enterline, and their teams do every day. They have my daily and everlasting support.”

In addition to all the games for kids, there will be 80 vendors in attendance, according to Director Huston.

“Everything from healthcare to education, learning more about the Dauphin County Library System, and even Recycle Bicycle will be on hand to fix your bike,” she said.