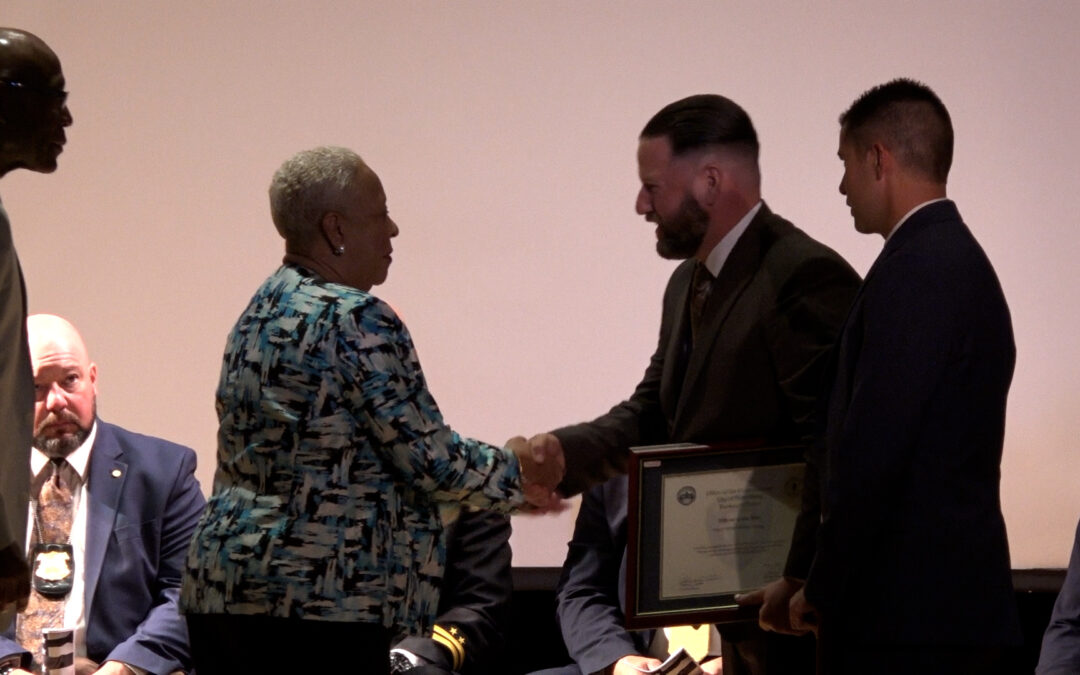 HARRISBURG – Dozens of City of Harrisburg police officers were recognized by their community and peers on Thursday for their heroic actions over the past year.

“[The City of] Harrisburg has the best police officers of any agency I’ve ever worked for and worked with,” said Police Commissioner Thomas Carter. “They are the absolute best.”

In addition, Patrol Officer Nathan Ishman was named 2021 Officer of the Year.

Officer Ishman has been with the Harrisburg Bureau of Police since 2007. He is considered one of the most reliable officers at the bureau, and according to Deputy Chief Sorenson, is often times contacted by neighboring agencies to help with warrant services.

“[He] is the embodiment of the quiet professional,” said Deputy Chief Dennis Sorenson said of Officer Ishman. “He is a sought-after field training officer and is an excellent mentor with a wealth of professional knowledge.”

In his time with Harrisburg Police, Officer Ishman has been a K-9 handler and full-time district officer.

“I love Harrisburg,” Carter said. “I love its residents. The Mayor loves Harrisburg. I hope that after you raise your hand you will have that same love and inherit those same understandings that we have; treat people as people and put yourself in their shoes to understand where they’re coming from. You treat everyone equally.”

The five new officers went through what Commissioner Carter called a “tedious process” to be selected Harrisburg Bureau of Police Officers.

I know it’s going to be a challenge, and there will be sometimes you say to yourself ‘What am I doing this for?’” said Carter. “The majority of people in this country love you and need you.”

Also in the ceremony, Lieutenant Kenneth Young, Jr. was promoted to Captain.

Captain Young joined the Harrisburg Police in January 2001 and has risen the ranks since. In 2004, he started in the Traffic Safety Unit, where he became a certified CPR and First Aid instructor. In 2014, Young was promoted to the rank of Corporal, and took on more of a leadership role in training younger officers.

Young was promoted to the rank of Sergeant in 2017, at which point he transferred to the Technical Services Division as Bureau Training Coordinator. During that time, he attended training sessions to complete the FBI Trilogy. In 2021, Young was promoted to Lieutenant, and in May of 2022, earned the role of Captain, taking over for the retiring Captain Todd Abromitis.

Captain Abromitis was among eight members of the bureau to be honored for their retirements on Thursday. Joining Cpt. Abromitis are Officer Robert McKenzie, Segeant Quinten Kennedy, and Detectives Chris Krokos, Ryan Neal, Richard Gibney, Richard Iachini, and Libertad Ramos.

Mayor Wanda R.D. Williams attended the ceremony, along with her Chief of Staff and Business Administrator Dan Hartman.