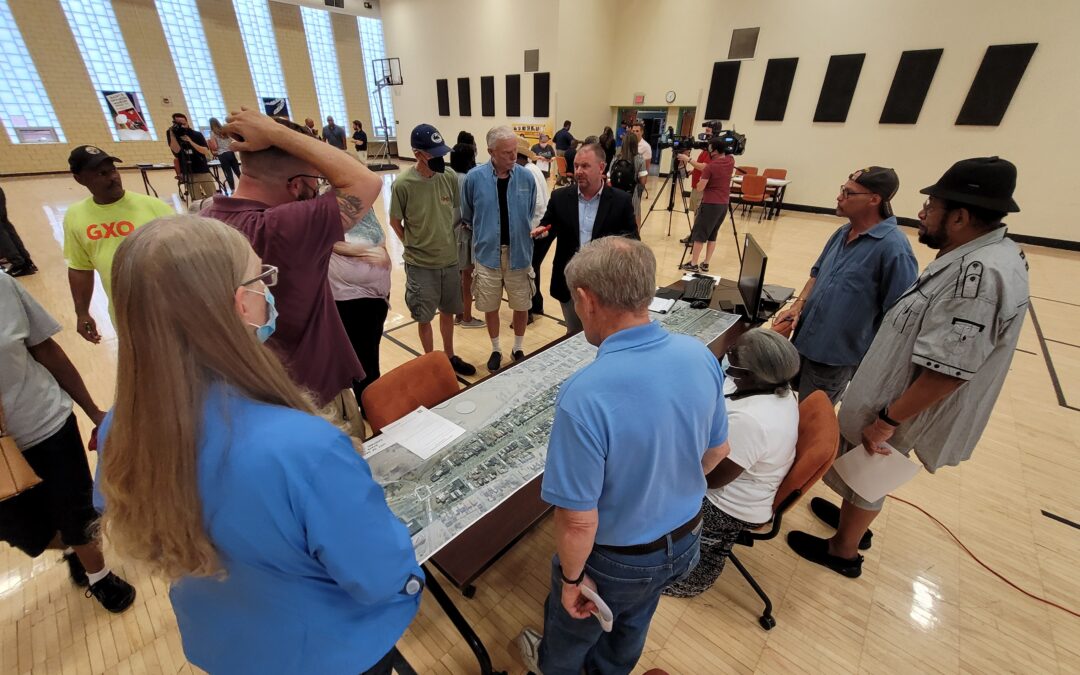 HARRISBURG — Dozens of city residents showed up to the Harrisburg School District administration building on Thursday night to discuss ideas and solutions on ways to fix one of the region’s most dangerous roads.

This was first of three public meetings designed so people can share their input on future construction plans for State Street, one of the busiest thoroughfares in the city, and one which is often used as a main point of entry and exit for people who work in the city. State Street, and its neighboring side roads, are also the home to thousands of Harrisburg residents, who have been vocal in their desire to want a safer, slower roadway.

“We want the public to know that we are listening, and we are here to come up with productive solutions to make State Street safer,” said Matt Maisel, Director of Communications for the City of Harrisburg.

In April, the city halted a State Street construction project which had been approved by the previous administration after residents raised concerns about a proposed loss of parking spaces.

On Thursday, all ideas were on the table, literally. City engineers from Dawood Engineering laid design concepts on tables set up in the school building gymnasium. One table featured current State Street traffic conditions, and two others offered future design concepts, along with features. Residents were able to walk from station-to-station in an open-house forum, and have 1-on-1 conversations with design experts. Among them, Dawood’s Senior Project Manager Wesley Heisley, who described interactions as “very positive.”

“We were able to show people what the possibilities are for State Street,” Heisley said. “We gave a lot of conceptual ideas, but we didn’t shoehorn things and make [residents] pick something. They now have a lot of ideas and choices to go home with.”

Residents who were unable to make Thursday’s meeting will get a chance to see the same designs at a second meeting, held Monday, June 6, at the Kappa Omega Frat House located at 2020 State Street. The meeting will run from 6-8 p.m. The new conceptual designs featured a shrinking of driving lanes from 12-feet, which engineers say is the standard width of a highway road, to 10-feet in an effort to slow down traffic.

In addition, no parking spaces will be lost to any future construction plans. There will also be a three-foot buffer zone between parking spaces and the driving lane, so drivers and passengers can safely enter and exit their vehicles.

“It looks good to me,” Harrisburg City Councilwoman Jocelyn Rawls told The Burg News. “I’m happy that parking will not be interrupted. I like how it encompasses everyone’s concerns.”

Any final design must be approved by PennDOT, as State Street is a state road. PennDOT has told the city any plan must have five lanes to maintain the heavy amount of traffic flowing in and out of the city. The project is also being funded in part by a PennDOT multimodal grant, which states there must be adherence to bicycle traffic. One proposed design features “sharrows”, which are markings on the road signaling drivers must share the road with bicyclists.

“I’m OK with the shared road,” Dick Norford, a Capital Area Greenbelt Association board member, told The Burg. “I think they’re very wise to narrow the lanes. We are not dissatisfied with the proposal.”

Timothy White, a City of Harrisburg resident, told FOX43, “”That’ll work. Not everyone is going to be happy about it, but that’s the best solution. It’s working everwhere else.”

Other features being discussed include having better times traffic lights, curb bump outs at intersections, and brighter intersections.

Public comments made at the first meeting Thursday, the next meeting on June 6, plus any comments made online at HarrisburgPA.gov/state-street, will be taken into account by Dawood designers and used to create a final draft which will be presented to the public at the June 22 meeting, held once again at the school district administration building.