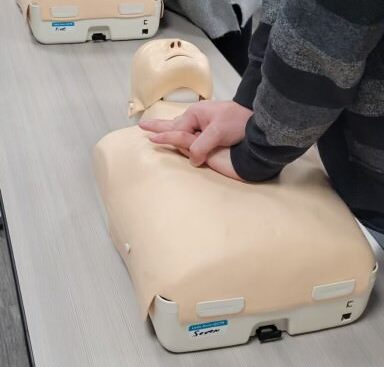 Harrisburg residents were able to learn hands-only CPR techniques to help save lives from Harrisburg Fire Bureau firefighters and local emergency medical workers. Hands-only CPR only uses chest compressions, as opposed to breathing into someone’s airwaves. It is considered an easier life-saving technique that anyone can do.

In this case, a number of curious citizens showed up to Fire Station 2 at 140 North 16th Street in the city’s Allison Hill neighborhood.

“It was a great night of interaction with our community,” said Harrisburg Fire Bureau Chief Brian Enterline.

According to the American Heart Association, 383,000 cardiac arrests occur outside of a hospital every year, and 88 percent of those take place at home.

People learning how to do hands-only CPR are taught to push on the chest at a rate of 100 to 120 beats per minute. An easy way to remember this is use songs that have similar tempo, like “Stayin Alive” by the Bee Gees.

Like anything though, practice makes perfect, and the Harrisburg Fire Bureau and Community LifeTeam EMS hope to have their next hands-only CPR event, open to the public, at Station 1 in Uptown Harrisburg at a date and time to be determined in April.

“We look forward to building more relationships within Harrisburg as we continue to partner with UPMC Community LifeTeam providing valuable life safety information.”

For more information, contact Matt Maisel, Communications Director for the City of Harrisburg, at (717) 255-7295.