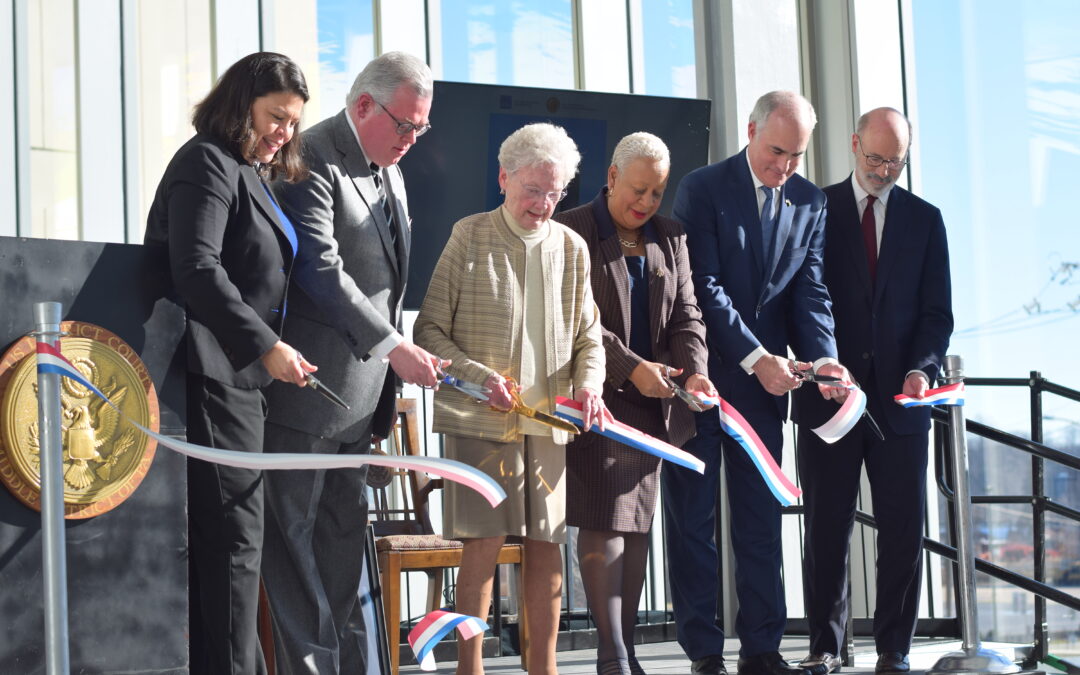 After decades of discussion and planning, the new Sylvia H. Rambo U.S. Courthouse on 6th & Reily Streets cut the ribbon on its planned early 2023 opening at a ceremony on Friday, December 9.

HARRISBURG – On a sun-soaked morning in Harrisburg, bright light shined through the windows at the new Sylvia H. Rambo United States Courthouse.

“It’s about time!” exclaimed Mayor Wanda R.D. Williams to the crowd of hundreds of guests and dignitaries.

Moments later, Mayor Williams was joined on stage by Governor Tom Wolf, Senator Bob Casey, the Honorable Judge Rambo, and others, to formally cut the ribbon the new federal facility. Friday’s ceremony marked the latest milestone in a 14-year project, set to finally be complete in early 2023.

“This building is a shining example of what can happen when we put down our swords and get bipartisan work done for the people who put us into office,” Mayor Williams said.

Work on the new federal courthouse started in 2008, thanks to then-Congressman Tim Holden and the late Senator Arlen Specter. The goal was to replace the current federal building, which was deemed lacking in security areas. From there, the site at N. 6th and Reily Streets was chosen. At the time, it was a vacant, four-acre parking lot.

Today, a 243,000-square-foot complex stands tall, with large glass windows which allowed for a sun-splashed ceremony.

“It’s great to see this finally come to life,” said Governor Wolf. “As America grows the courts have grown with it. They need and deserve spaces that will do justice to their important work.”

Courtrooms will feature more seating than the current federal building for attorneys and the public. Unlike the current complex, natural light is an abundant feature not only in the lobby, but in the courtrooms as well.

The General Services Administration was heavily involved in the creation of the building. Its “Art In Architecture” program is prominently featured throughout the complex. A mural, inspired by the Susquehanna River, by Monique van Genderen dominates the lobby atrium, while a series of paintings by Claire Sherman called “Trees and Vines” are located on each floor of the building’s tower.

In front of the building is the name of the pioneer who the courthouse is named after: Sylvia H. Rambo. Nominated to be a federal judge in 1979 by President Jimmy Carter, Rambo served as chief judge from 1992 to 1999. She is currently a senior judge for the Middle District Court of Pennsylvania.

“The courthouse is a powerful symbol of justice and equality,” Judge Rambo said. “As we gather here today, we celebrate the ever-vital role that federal judiciary has in promoting our democracy.”

The new courthouse will help reshape a previous barren block of land in Midtown Harrisburg. Next door, the newly constructed Pennsylvania State Archives Building is currently being constructed. New, affordable housing units are expected to be placed along N. 6th Street, with the hopes of restaurants and shopping options to soon follow, according to Mayor Williams.

“This building will mean so much more than a courthouse to the people of this neighborhood,” she said. “This is truly an exciting day for the City of Harrisburg.”