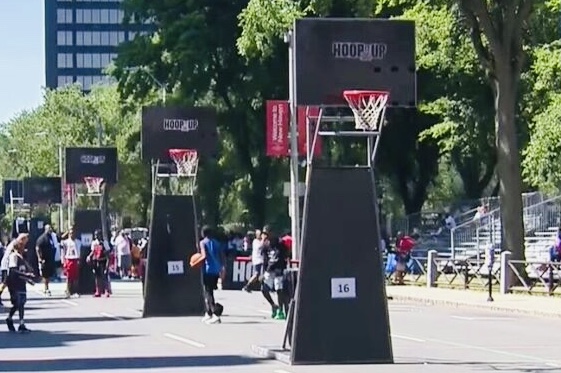 HARRISBURG – City Island will turn into a Hoops Heaven this summer, and you can take part in what is expected to be one of the largest single-day basketball tournaments in Harrisburg history. All you need to do is get your crew, and sign up.

Kevin Garnett’s Hoop It Up powered by 3×360 Sports is proudly partnering with the City of Harrisburg, in conjunction with the Harrisburg Bureau of Police and its Community Services Division, to bring the Hoop it Up Harrisburg. to bring the Hoop It Up Harrisburg 3×3 Street Fest to City Island on Saturday, June 4, from 9 a.m. to 9 p.m. There will be as many as 28 basketball courts on the City Island south parking lot, along with music, food vendors, and for the winning teams, up to $1,000 cash prizes.

The Hoop It Up Harrisburg 3×3 Street Fest is open to boys, girls, men, and women of various ages, all abilities, and from anywhere throughout the Capital Region. Divisions include: Under-8, U10, U12, U14, U16, U18, 19+, 31+ and 45+, along with a Men’s FIBA Pro Am bracket. The sport of 3-on-3 basketball is internationally recognized, and most recently finished its Olympic debut.

Hoop It Up Harrisburg is being brought to City Island by Drew Dawson, a Trinity High School graduate, and co-founder and current Managing Member for 3×360 Sports. He envisions this 3-on-3 tournament as having the same social footprint on the area as the legendary Gus Macker tournaments did for decades.

“Although basketball and my career have taken me out of the area, I grew up here,” Dawson said. “Harrisburg is home, and I have many great memories, family, and friends, as well as old teammates throughout Central Pennsylvania.”

Drew has been working with Chardan Huston, Director of Community Relations and Engagement in the Community Services Division of the Harrisburg Bureau of Police. The two are garnering support from the Harrisburg Community.

Huston believes the Community Service Aides direct involvement with the Community will play a major role in the success of the event.

“The Community Service Aides are looking forward to help make this event a success as they see it as a great kick off to the Summer and as a great way to engage the Harrisburg Community of all ages,” Huston said.

Registration is available by visiting 3×360.com and clicking the “Register for Hoop It Up Harrisburg” bar on the top of the page. You can also visit this link directly: https://www.3×360.com/street-fest-harrisburg. All youth and adult divisions cost $150 to register, while Pro-Am teams cost $200.  Teams may have up to five members.

A rain date is scheduled for Sunday, June 5.

Widely recognized as the most prolific 3-on-3 basketball tour in the world, Hoop It Up was acquired by NBA Hall of Famer, Kevin Garnett, and his Big Ticket Sports LLC in 2019. Since its inception roughly 30 years ago, Hoop It Up has collaborated with many organizations including numerous NBA teams to create memorable 3-on-3 basketball events for millions of participants worldwide.

This is a family friendly event, Dawson said, and a portion of the proceeds will benefit a to-be-determined Harrisburg-based charity.