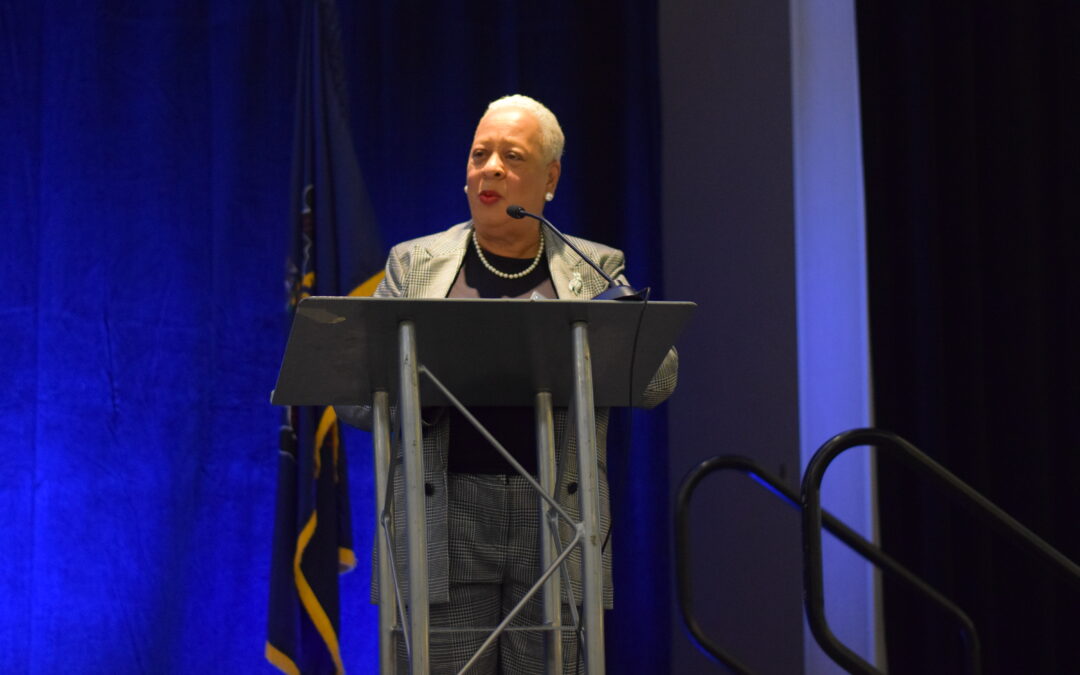 Mayor Wanda R.D. Williams delivered her first State of the City address to hundreds of dignitaries, elected officials, and Harrisburg business leaders on Thursday, October 20 at the Harrisburg Hilton.

HARRISBURG – Mayor Wanda R.D. Williams proclaimed on Thursday to an assembled crowd of Central Pennsylvania business leaders, elected officials, and dignitaries that the City of Harrisburg is the strongest it has been in decades.

Mayor Williams delivered her first State of the City Address to hundreds of people at the Harrisburg Hilton. She touted steps the city is taking towards getting out of Act 47, highlighted by the city making its final payments on a $125 million debt which started in 1997. Mayor Williams promised to soon pay off the corresponding AMBAC assurance debt.

“More than $12 million will go back into our annual budget,” Mayor Williams proclaimed. “Money that will go towards safer roads, more police officers and firefighters, and other capital investments the city has lacked for three decades.

Mayor Williams lauded the partnerships the city has with Dauphin County and state leaders, and how those positive relationships provide more opportunities to City of Harrisburg residents, be it through work programs, business opportunities, or family-friendly festivals.

She also praised the work of City of Harrisburg law enforcement and first responders. The Harrisburg Bureau of Police is on pace to surpass last year’s total of illegal guns taken off the street. Mayor Williams and Commissioner Thomas Carter both expect the bureau to reach a full compliment of 158 officers in 2023.

Meanwhile, the Harrisburg Bureau of Fire is responding to fire calls in the city in record time, often times in under five minutes. They are staffed 24 hours a day throughout the year, and have not lost a life on their watch in 2022.

“The work being done by Chief Brian Enterline and the Harrisburg Fire Bureau is second to none,” Mayor Williams remarked. “It’s not just lives being saved. It’s property as well. Hundreds of thousands, if not millions of dollars of property has been saved by our firefighters this year. Furthermore, a lack in volunteer firefighters is putting an even greater dependence on our men.”

In addition, the mayor thanked the eight firefighters who recently returned home from Florida, where they were assisting the Federal Emergency Management Agency with search-and-rescue efforts following Hurricane Ian.

“We thank you and salute your work at home, and around the nation,” she said.

Mr. Baker highlighted the $2.5 million in grants the Department of Parks and Recreation acquired in 2022, and how that will help rebuild and revitalize city parks, playgrounds, and trails. Parks and Rec also opened the doors to a record number of volunteer groups which have graciously donated their time and manpower to beautifying the city.

Mr. Singleton spoke about the ongoing disparity study being conducted by the City of Harrisburg in partnership with Dauphin County and Impact Harrisburg. The study will help the city have a better understanding of where it needs to improve in terms of minority representation in companies which do business in the city.

Ms. Kelley went into greater detail about the city’s financial recovery, and the work her department did to ensure the city had a $1.5 General Fund budget surplus, its first budget to produce a surplus in nearly 30 years.

Ms. Hill talked about the daily efforts of the Department of Building and Housing Development to provide shelter, home improvements, and safety to city residents in need. Their Housing Rehabilitation Program, funded through federal HUD grants, helped improve the lives of families in 21 homes, while the Lead Safe Program, which abates lead in homes built before 1979, removed harmful materials in 53 homes in 2022.

Mr. Bortner previewed Operation Municipal Migration, which as he put it, will turn the city’s internal computer system “from an ’85 Oldsmobile to a Beamer.” The current decades-old system is in the process of being replaced by a fully integrated system, which will help modernize City of Harrisburg computing for residents and businesses alike.

Lastly, Ms. Roberson highlighted how Mayor Williams has been more available to the Harrisburg community than ever before. Since her inauguration, the mayor has scheduled 200 personal appointments for citizens to meet with her on Fridays and has participated in nearly 60 community-events and engagements.

“We are 10 months into a journey to rebuild this city,” Mayor Williams said. “We banded together because we all love this city. Many of us were born here. Many of us raise our families here. WE are Harrisburg, just like all of you. And for the next three years, and God-willing four more after that, the best is yet to come.”