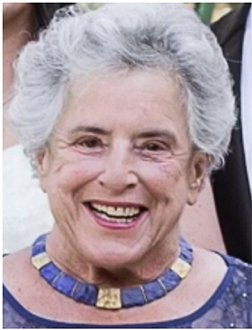 Lois Lehrman Grass, an icon in the City of Harrisburg for her lifetime of volunteerism, community service, and philanthropy, died at the age of 90.

HARRISBURG – Lois Lehrman Grass was a visionary, a cultural leader, and a selfless philanthropist whose fingerprints are all across the City of Harrisburg.

Her charity is marked in the creation and maintaining of numerous Harrisburg-area institutions, including the Whitaker Center for Science and the Arts, Jewish Family Service of Greater Harrisburg and the Jewish Community Center, Capital Area School for the Arts (CASA), the Hamilton Health Center, and Harrisburg Area Community College.

Mayor Wanda R.D. Williams said in Grass’ passing, the City lost one of its “giant hearts.”

“We are heartbroken in the city to hear of Lois Lehrman Grass’ passing. She will be remembered in eternity the way she was embraced in life, as someone who was a tireless and selfless giver and provider,” Mayor Williams said.

In honor of her life and devotion to others, Mayor Williams has declared Friday, September 23, 2022 as Lois Lehrman Grass Day in the City of Harrisburg.

Lois was born in Harrisburg on September 30, 1931, and spent the rest of her life trying to improve the lives of others. Her volunteer work has spanned more than six decades, starting in her 30s, according to her family, when she was named Chairman of the American Red Cross chapter of Greater Harrisburg. She also became the first woman to chair the United Way campaign. When she was 31, she founded the Aurora Club to help people with developmental disabilities.

Along the way, she found her passion for the arts. Lois helped form arts programs at the Whitaker Center and Harrisburg Area Community College, where her mother Rose’s name adorns the masthead. In 1989, she was named the inaugural recipient of the Award for Distinguished Service to the Arts in the Capital Region.

Lois was immensely proud of her Jewish heritage and Jewish community in Harrisburg. Her donations helped form the Lehrman Chapel at Ohev Shalom synagogue in Harrisburg, and the Rose Lehrman Wing, named after her mother, at the Hebrew University School of Education in Israel.

In addition to founding the Jewish Family Service of Greater Harrisburg, she helped provide a sizable donation to help the Jewish Community Center move into their new campus at the old Dixon University Center along 2nd Street.

She is survived by her children Martin Grass, Roger Grass, and Elizabeth Weese, and their families which include 15 grandchildren and 21 great-grandchildren. Services to pay respects will be held on Friday, September 23 at 2:00 p.m. at Temple Ohev Sholom, 2345 N. Front Street, Harrisburg, PA 17110. Burial will follow at Mount Moriah Cemetary at Strouse and Fritchey Streets.

Contributions in Lois’ memory may be made to any Jewish, arts, or healthcare organization of your choice.