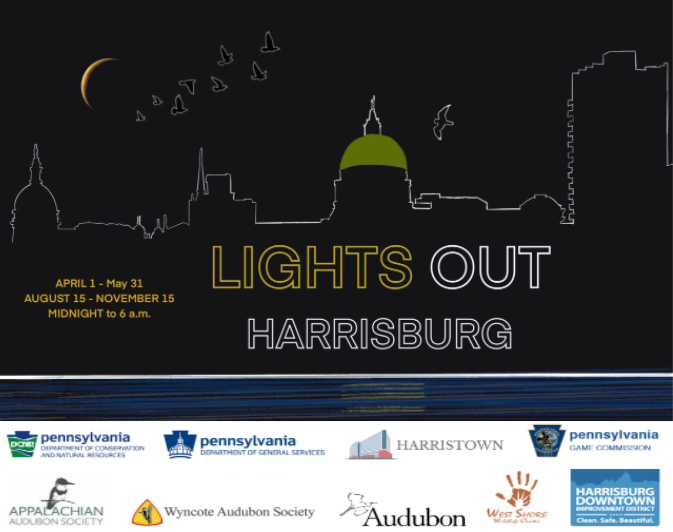 HARRISBURG — As the weather gets warmer, chances are you’ll start seeing a lot more friends flying our friendly skies over the state capital.

However, it’s at night, when you can’t see the thousands of birds migrating back to their northern homes, that can cause the most unfortunate damage.

According to the National Audubon Society, a national non-profit environmental organization dedicated to conservation of birds and their habitats, up to one billion birds die each year across the United States when they collide with buildings and windows, attracted by their bright artificial lights at night. It’s why the City of Harrisburg, alongside state and regional partners with the Department of Conservational and Natural Resources and Appalachian Audubon, is pleased to announce for the next two months, we are going “lights out.”

Harrisburg is joining the national Lights Out initiative,” Harrisburg Mayor Wanda Williams said. “This voluntary program involves turning off or blocking as many external and internal building lights as possible at night during migration seasons when birds are passing through the city and state capital by the millions. We invite businesses and residents in the city to join in.”

Mayor Williams is asking city residents and businesses, if they are comfortable in participating, to turn off their external and internal lights from midnight to 6 a.m.

“During the spring and fall migration periods, property managers and their tenants are encouraged to voluntarily switch off unnecessary lights, especially in a building’s upper levels, lobby and atrium, and turn off or dim external lighting,” said Appalachian Audubon Society President Ali Bowling.

Along with city residents, the Department of General Services plans to turn off lights to 15 buildings in the State Capitol Complex during the eight week period, including spotlights on the Capitol Dome, and lights in the Keystone Building atrium.

“Turning down lights in our tallest buildings will not only protect countless birds, but also save energy and reduce carbon emissions,” said Jason Snyder, Department of General Services Acting Deputy Secretary for Property & Asset Management. “We’re pleased to partner on the Lights Out initiative and are committed to preserving the safe passage for our friends in the skies.”

“Many eastern U.S. bird species are in steep decline, but that can change,” said State Ornithologist Dr. Sean Murphy. “There are so many ways to help save birds. All Pennsylvanians can make a difference with everyday actions–Lights Out Harrisburg provides a safer path for migratory birds and will help bolster bird populations across the continent!”

Strawberry Square owned by the Harristown Development Corp. and 333 Market St. are committed to participating in the program.

Harrisburg joins Philadelphia and Pittsburgh, and more than 30 other cities nationwide, with Lights Out programs. The National Audubon Society, along with partners, established the first Lights Out program in 1999 in Chicago.