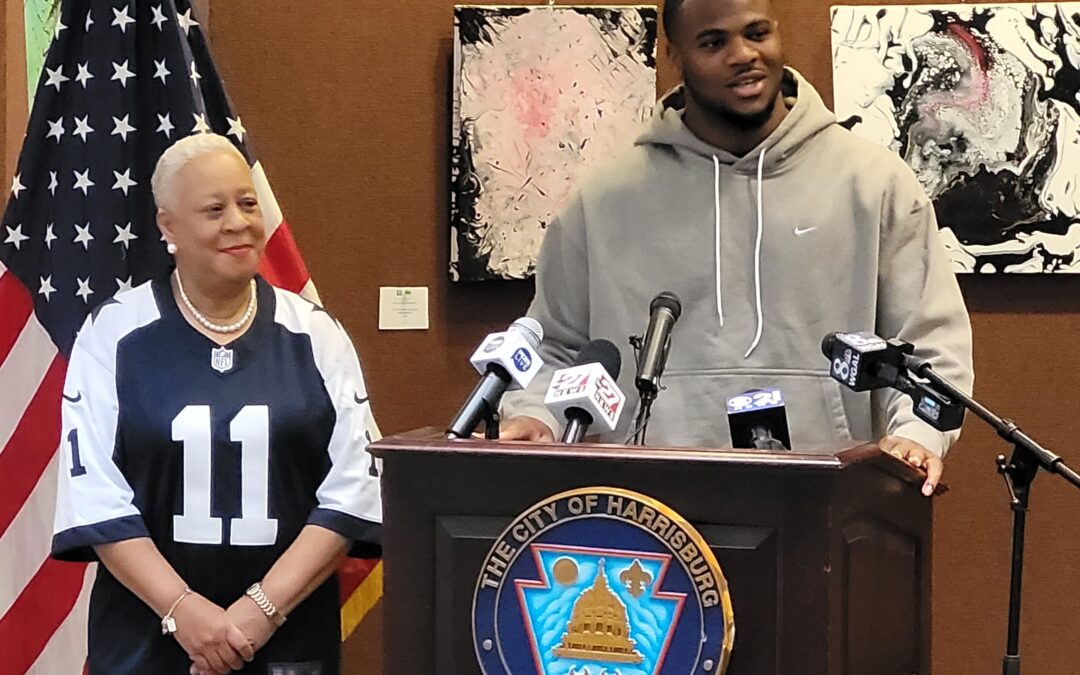 HARRISBURG – Micah Parsons has impressed friends, family, and people who don’t even know him, in virtually every step of his life. The past year has been no different.

On Tuesday, Parsons was awarded the Key to the City of Harrisburg in a ceremony at the Dr. Martin Luther King, Jr. City Government Center. This was the second time he was given the city’s top honor, as he was presented with the Key last May after he was drafted 12th overall in the 2021 NFL Draft by the Dallas Cowboys.

Since then, all Micah Parsons has done is gone onto have one of the greatest rookie seasons by a defensive player in NFL history. His 13 sacks were third most ever by a rookie, and 80 combined tackles were the most ever by a first-year player since the statistic was first recorded in 2001. His exemplary rookie year earned him the prestigious award of NFL Defensive Rookie of the Year, winning it in a landslide with every first-place vote. Parsons also finished second place in the NFL Defensive Player of the Year honors.

Mayor Wanda R.D. Williams, an avid Dallas Cowboys fan, presented Parsons with a plaque, along with his second Key to the City, as she was decked out in a Parsons #11 Cowboys jersey.

“This brings me so much joy to highlight the outstanding person Micah has become,” Mayor Williams said. “Here is a man who is making the City of Harrisburg proud every single day. He’s a role model to young Harrisburg Cougars throughout the city. How amazing must if be for a young child in this city to turn on the TV every Sunday and see one of their own star for America’s Team?”

“Some people may think this is just a key,” Parsons added. “But this means everything to me because of how much the City of Harrisburg means to me. At the end of the day, you never forget where you come from. Without the trials and tribulations and hard work from my mentors, I don’t know if I’d be here today.”

Parsons graduated Harrisburg High School a semester early in December 2017, so that he could enroll early at Penn State University. There, he had a three year career with the Nittany Lions, where he earned All-American honors, all while graduating in three years.

In the past year, Micah started the Parsons Foundation, a nonprofit which helps underprivileged kids in the Harrisburg area. During the COVID-19 pandemic, the Parsons Foundation held food giveaways at the Boys and Girls Club in Harrisburg, and teamed up with Soul House Café to give out free meals and supplies to children and their families.

Parsons accepted his second Key to the City alongside his mother, Sherese.

“This was about coming back and remembering why you got there and where you’re at now,” Parsons said. “I never had a person to look up to [when I was younger]. There were people who came through but they never came through in the right way. I hope I can be that person people can look up to.”

Among those in attendance at the MLK City Government Center on Tuesday were other members of Parsons’ family, as well as some of his former teachers in the Harrisburg Area School District and current students at the high school’s SciTech campus, where Micah attended school.