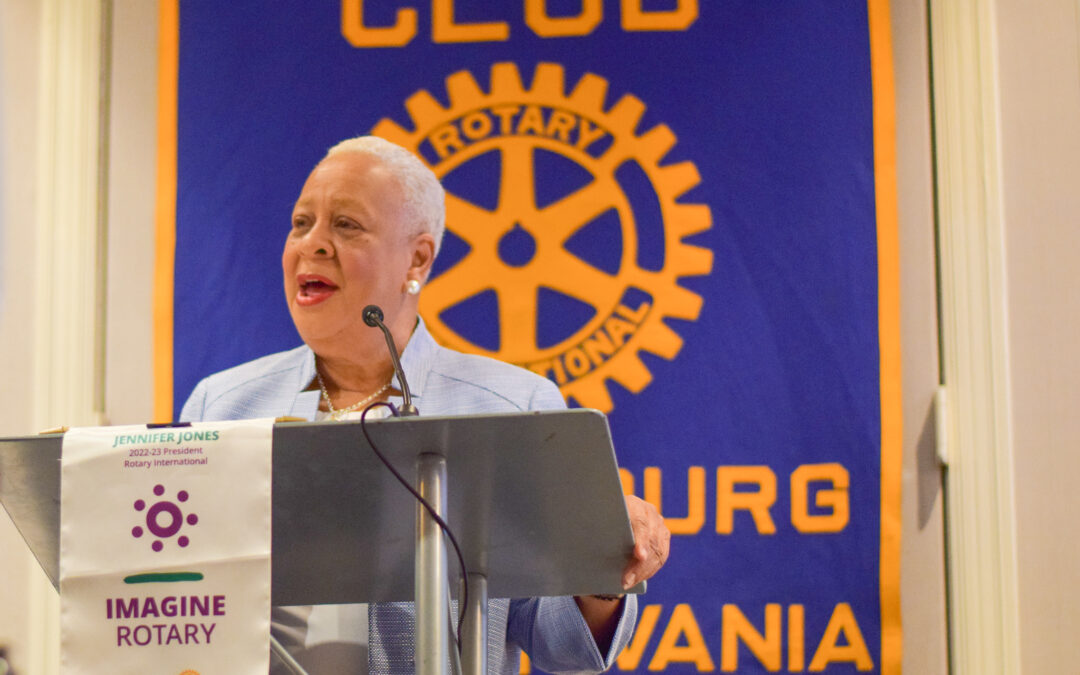 Mayor Wanda R.D. Williams was the featured speaker at the Harrisburg Rotary Club monthly luncheon meeting at the Harrisburg Hilton, where she laid out her vision for the city, discussed how she put the City of Harrisburg above herself when she ran for Mayor, and her desire to give everyone an affordable place to live.

Good afternoon! It is truly an honor to be with all of you today. I want to talk to you about some of the great things we’re doing in the City of Harrisburg, and how we can work together in the future to achieve amazing things for our home.

I say our home because that’s what this is. Home above all else. Most of you may know, I am Harrisburg through and through. Born and raised. 67 years.

Before Mayor. Before City Council President. Before Harrisburg School Board President – I was Wanda from Uptown Harrisburg, and still am today. Only difference now is I have a nice corner office and I get invited to a lot of delicious lunches now!

But anyone who knows me knows I am where I am today because of who I’ve been my entire life. That’s not changing. And every day I’m grateful for the people of Harrisburg for trusting my vision – because it’s their vision too. In my first six months, we’ve already accomplished so much, and the best is yet to come.

The rotary club has a saying: “service above self”. Last year, after decades of public service, I was about to put myself first. I was *so* close to retirement. But it didn’t feel right. Harrisburg had lost its way during the pandemic, and I’d like to think I knew how to lead it out. Service above self. It’s the best career decision I’ve made in my entire life. And it perfectly defines how I plan to run this first term as Mayor – and who knows, maybe a second one as well?!

The last two years have been unspeakably difficult for so many people in this city. So many of us have lost our livelihoods – our jobs, our careers – and tragically in many cases, we’ve lost loved ones too. I lost two people. They will never come back, and their memories will always be a blessing. And yet, we move forward. Because we have to. And we have the means to make the City of Harrisburg a better, safer city for everyone who lives here.

The pandemic took so much from us – but because of it, we’re able to rebuild our city. The Biden Administration and Congress awarded Harrisburg $47 million in American Rescue Plan funding. We’ll be able to give our less fortunate residents a place to live and love. We can get to work fixing homes so everyone has a safe space to rest their head at night. Our children will have fun activities to do during the summer thanks to new playgrounds and water parks. And to our small businesses throughout harrisburg – the backbone of our city – help is on the way as well.

Service above self. We could have taken this $47 million check from the federal government, and used it pay our own city bills and given it out to a select few. That would be selfish. This is money that can reshape the lives of the people of Harrisburg, and that is how we intend on spending it.

We’re devoting $8 million – and hopefully more when you consider how things are in housing – to build hundreds of affordable homes for low income Harrisburg residents. Five million dollars is going towards home repairs for folks struggling to make ends meet. We’re even going to pick up $1 million in late trash bills that people weren’t able to pay because they simply didn’t have the money to do it.

And for our children, we are making plans to create a state-of-the-art water park – complete with a spray area, slides, lazy river, and plenty of community space so our families have a place to rest, relax, and enjoy each other.

That is just a small sample of what we have in store. But we can’t do it alone. We need your help. Building is only part of solution. The other is beautifying what we already have. We need to take pride in our city once again. Today, I’m urging you – as business leaders and influencers in this city and region – to help us make this city even more beautiful than it already is. Plant trees and flowers, pick up trash, trim overgrown bushes and weeds. Organize and mobilize.

Starting tomorrow, we are so excited here in the city to work with the Harrisburg First Assembly of God church and their “Faith Into Action” week. For the next four days, teenagers and young adults will be going from park to park throughout Harrisburg and performing community service. Trash pick up, weeding, mulching, painting. This shouldn’t only happen one week every summer. That’s why I’m calling on the leaders in this room to ask your employees to pitch in; volunteer their time and help make Harrisburg healthy. The Rotary Club itself has already agreed to fill and maintain the planters across the street at city hall for their annual signature service project, and we are incredibly grateful for that.

We are at the dawn of something spectacular here in Harrisburg and it’s because of people like you in this room. Service above self. We need that now more than ever. If we’re going to turn harrisburg around, we need everyone to pitch in. Use our downtown, eat at our restaurants, organize a volunteer day. I am so thankful to each and every one of you for doing your part.