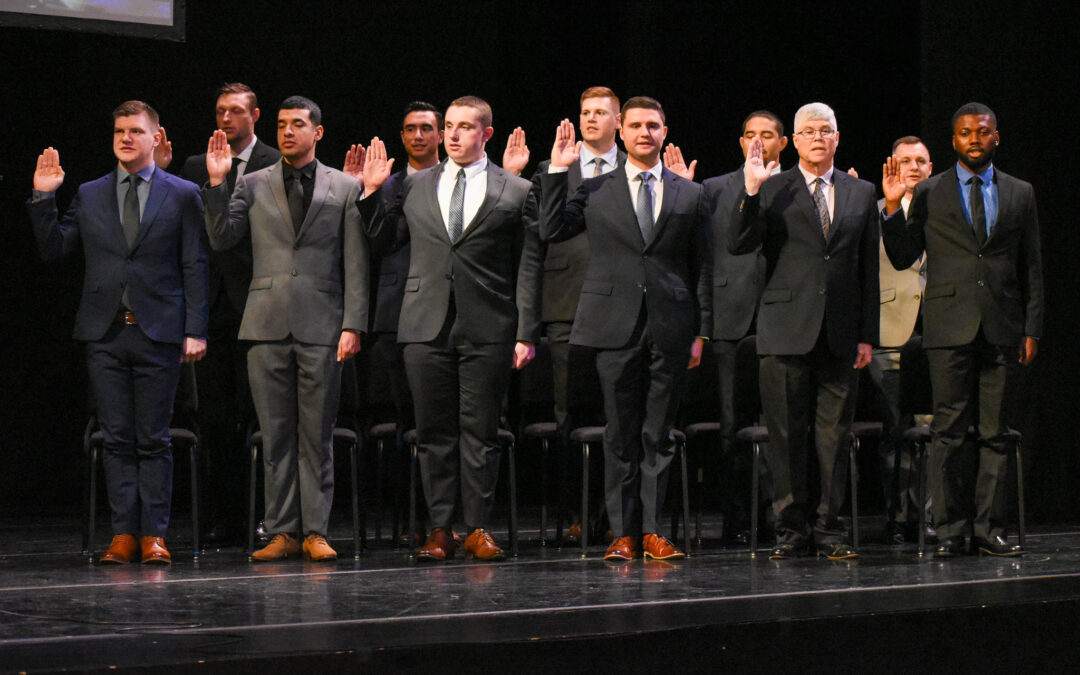 The Harrisburg Bureau of Police welcomed 11 new officers on Thursday in one of the largest recruiting classes in recent years. Ten of them will start a six-month police academy at HACC’s Piccola Law Enforcement Complex on Monday, January 9. One, Ofc. Elliot Christman, has already completed his police academy certification, and will begin in the bureau’s training program.

James Bard was born and raised in Central Pennsylvania. Soon after graduating high school, he began working in Harrisburg as a Natural Gas Technician, later transitioning to residential plumbing. During this time, he was able to learn much about the trade, and the Harrisburg Community. James is also an active volunteer at his church. He currently resides in Thompsontown, PA, with his sister.

Marco G. Benitez was born and raised in the country of Colombia. In 2011, Marco moved to the United States with his family, and settled in Lebanon, PA. He joined the U.S. Army in 2014 as an Infantryman. He was part of military operations including tours in Afghanistan, South Korea, and Poland. He separated from the Army with an honorable discharge after eight years of service at the rank of Staff Sergeant. He has completed multiple courses during his military career that would help him as a police officer in the City of Harrisburg.

Elliott D. Christman was born and raised in Emmaus, PA. He graduated from Emmaus High School in 2017. During his junior year of high school, he joined the varsity football team at Emmaus as an inside linebacker and tight end. After high school, Elliott attended Lehigh Carbon Community College for two years before transferring to Bloomsburg University where he majored in Criminal Justice. After graduating from Bloomsburg University, he completed the Mansfield University Municipal Police Academy. He was the third-highest in his cohort.

Sean Cigich grew up in State College, PA, where he went to high school and served his community as a Nationally Registered Emergency Medical Technician for over 3 years. After high school, Sean earned an Associate’s Degree from the Pennsylvania College of Technology, and continues to work towards a Bachelor’s Degree in Homeland Security & Emergency Management. After graduating college, he served in the United States Air Force at Francis E. Warren Air Force Base in Cheyenne, Wyoming. During Sean and his wife’s time in Wyoming, their hobbies included hiking, skiing, and coaching at the local CrossFit gym on base. Upon completing his active duty term, Sean transitioned to the 193rd Special Operations Wing as a firefighter in the Air National Guard. Sean and his wife recently moved from Wyoming with their newborn and golden retriever to Duncannon, PA. Sean proudly comes from a family of blue with a sister currently serving as a Tucson City Police Officer, and his father a retired Pennsylvania State Trooper. Sean is excited to learn, train, and serve the people of our community.

Daniel G. Donovan was born in New London, Connecticut. His father was raised in Hershey, PA, and his grandfather served for 38 years with the PA State Police. Daniel graduated from Grove City College, Grove City, PA, with a Bachelor’s Degree in History, and subsequently earned a law degree (J.D.) from Case Western Reserve University Law School in Cleveland, Ohio. Daniel served for 21 years as an attorney in the U.S. Navy’s Judge Advocate General’s Corps, including operational assignments with an aircraft carrier battle group, Naval Special Warfare Group ONE in San Diego, CA, and with U.S. Forces Korea in Seoul, Republic of Korea. After his service in the U.S. Navy, Daniel served an additional 13 years as a senior civilian attorney with the U.S. Department of Defense. He has been married for 40 years, and has three children and two grandchildren.

John J. Grant was born and raised in Accra, Ghana, until he moved to the United States in 2010. He attended 9th grade at Briarcliff High School in New York, and relocated to New Jersey with his family where he later graduated from Old Bridge High School in 2015. John attended Berkeley College in Woodbridge, NJ, and earned his Bachelor’s Degree in criminal justice in 2019. In 2020, John moved to York, Pennsylvania, to join the Harrisburg Police Department.

Steven Gray was born and raised in Carlisle, Pennsylvania. In 2011, Steven graduated from Carlisle High School, and has earned degrees in business administration and marketing from West Virginia University. Later, he attended the West Virginia State Police Academy, and graduated as Valedictorian in August 2019. He has completed several elective trainings and certifications post-academy such as DUI enforcement and crash investigation which will be resourceful while working in Harrisburg City. Officer Gray currently resides in Carlisle, PA, but looks forward to relocating to Dauphin County soon.

Jared Nouzovsky was born in Norfolk, Virginia, and grew up in Minersville, Pennsylvania. He graduated from Minersville High School in 2012. After graduation, he joined the Pennsylvania Army National Guard as an Infantryman, where he eventually earned the rank of Sergeant, and also attended Kutztown University. For the past two years, Jared has worked for the Dauphin County Sheriff’s Office which has introduced him to the world of law enforcement, and he looks forward to starting his new career with the Harrisburg Bureau of Police.

Thomas L. Oxenrider was born in Lewisburg, PA, and raised in East Pennsboro Township. He attended East Pennsboro Area High School, then moved to Klingerstown, Pennsylvania, during his senior year of high school, graduating from Tri-Valley Jr/ Sr High School. Thomas enjoyed volunteering at the East Pennsboro Emergency Carnival and East Pennsboro High School home track meets. After graduating high school, Thomas completed two years of college, later earning his Bachelor’s Degree in criminal justice from Southern New Hampshire University. While attending college, Thomas worked for a food manufacturing plant for three years, and was part of their Confined Space Rescue Team. For the past two years, Thomas has worked as a Correctional Officer 1 at Camp Hill State Correctional Institution. During this time, Thomas has gained knowledge and experience working with the general population residents, maximum security residents, and individuals in the Special Observation Assessment Unit. Thomas looks forward to helping and serving the Harrisburg community. He currently resides in Shippensburg, PA, with his wife, Kayla, and their 12-year-old dog Martin, with plans to move closer to the city within the year.

Evan A. Ramos was born in Paterson, NJ, and grew up in the neighboring town of Hawthorne, NJ. He graduated from Hawthorne High School in 2013. Evan then received a scholarship to wrestle at Shippensburg University, where he became a two-time All-American and graduated with his Bachelor’s Degree in criminal justice in 2018. From there, he started a career in collegiate coaching at Bucknell University. After a year at Bucknell, he went on to become the Head Assistant Wrestling Coach at the University at Buffalo for three seasons. During his coaching career, he also wrestled internationally representing Puerto Rico at multiple world level events. He has been married for 3 years to his wife Alicia, and they have 2 daughters by the names of Lily and Sophia. He is grateful for the opportunity to serve the great City of Harrisburg.

Robert C. Tritch III was born and raised on Long Island, NY, where he graduated from Patchogue Medford High School in 2017. After graduating high school, he attended Suffolk County Community college to obtain his EMT certification.  Soon after, Robert began working as an EMT, volunteering at the local fire department, and later became a public safety officer for the Town of Brookhaven. In 2019, Robert enlisted in the United States Army as a Military Police Officer in the reserves, and continues to serve today. Robert has always wanted to become a police officer, and in 2020, he moved to Central Pennsylvania to achieve this goal. Shortly after moving to Pennsylvania, he became employed by the Pennsylvania Department of Corrections as a Corrections Officer. Robert has a lot of applicable experience that will help him as a police officer in the City of Harrisburg.